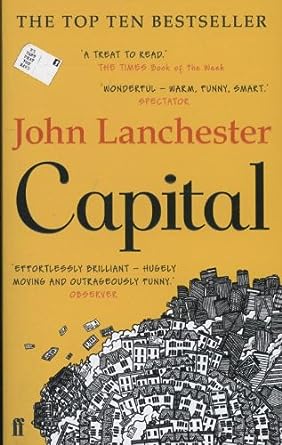 Every holiday I try to read a different sort of book - this summer was no exception, except that this book was big, over 550 pages, and most notably, it was fiction, you know, make-believe.   These days I spend much of my time engrossed in non-fiction - scientific, medical and bioethical - so Capital was novel reading (pun intended).  Fiction is dreaming, a sort of time wasting.  What is its point?  As one of the book's characters states, '... fiction suffered from an irredeemable fault: it was all made up.'  And I had never heard of the apparently widely-acclaimed author John Lanchester - well, I do live in Aberystwyth.  When a good friend gave me a copy of Capital, my heart sank - would I ever have the stamina to finish it?  Yes I would, and I did.  It was not gripping stuff, neither uplifting prose nor intriguing plot, but it was interesting enough to make me turn the pages.  Its 107 mini-chapters helped - I can handle five pages at a sitting with my slow, read-every-word, dyslexic-like manner.  And I was fascinated enough to find out what a 'top ten bestseller' sounds like, even, could I write such a money-spinner?

The book is rooted, as the title suggests, in the capital, namely, London.  In fact, in one street, Pepys Road, where an assortment of mostly rich residents live and some poorer people toil - a mix of the workers and shirkers.  And the title is also a double entendre for 'money' as the narrative comes hard on the heels of the Lehman Brothers crash of 2008 - which occurred exactly five years ago, as I write - and the subsequent financial disaster for us all, including those residents of Pepys Road.  The book has a storyline, albeit somewhat implausible, based on an campaign of postcards, DVDs and even dead birds anonymously delivered to the various houses in Pepys Road, all with the same sinister message, 'We Want What You Have.'

This plot was, for me, almost incidental - it was not strong or particularly engaging.  In the final few pages the mystery is solved, the police do their job and the weirdo behind the campaign of intimidation is revealed.  The dénouement is not very clever or unexpected.  I had hoped that twenty-first-century bestselling literature would shock and enthral me.  It was all a little mediocre.   I certainly cannot agree with the reviewers from the Sunday Times that the book was, 'Brimming with perception, humane empathy and relish' or from the Observer that it was 'Effortlessly brilliant - hugely moving and outrageously funny.'  Matthew Parris is moving and AA Gill is funny - John Lanchester is hardly either.  Are these journalists gullible and given to hyperbole, or am I cynical?

The strength of the book - the stuff I really enjoyed - was its portrayal of a diverse crowd of characters.  They included a rich banker, a Senegalese football star, a Polish builder, a Zimbabwean parking attendant, a Hungarian nanny, a dying woman and several others.  They were described with considerable insight and warmth as the plot unfolded.  They were vignettes, glimpses into their various lives and struggles in the Capital, affected by both London and money.  In the end, a number of these disparate characters met and interacted, but not in any convincing or meaningful manner.

The book got me thinking.  Could I boost my pension pot by producing a modern blockbuster like Capital?  Maybe.  After all, John Lanchester admits that he wrote Capital, '... in my usual way, which is to wander about aimlessly and look out of the window and generally faff about.'  I could do that.  And again, Alexander McCall Smith, creator of The No. 1 Ladies' Detective Agency and another author I've not read, reckons that, 'When I'm working at full tilt, I average about 1,000 words per hour.  I sit at the keyboard and it all comes out.  It's an extraordinary thing, but I think it's because fiction is created by the subconscious mind, which is always exploring situations and possibilities.'  Indeed, I already have in my head a general theme for a chunk of fiction.  All I need now is a lucid head, a publisher's advance, a clear desk and a free year, none of which seems forthcoming.  So the answer appears to be, No.

I am left uneasy about Capital.  What is its purpose?  It contributes little to the understanding of the human condition.  Having read it, I do not feel as though I have gained any insight, or a new perspective on anything.  A snigger here, an agreeing nod there is not much return for many hours spent reading.  Has modern literature become merely an entertainment at a pretty undemanding level?  A book for the beach?  A reflection of banal TV and a culture dominated by the trivial?  Religion or even profound agnostic thinking, hardly get a mention in the book.  Sex and swearing appear more frequently.  Has the richness of human life degenerated into an obsession with money and survival in the city?  If so, then perhaps Capital is a true story of our times.