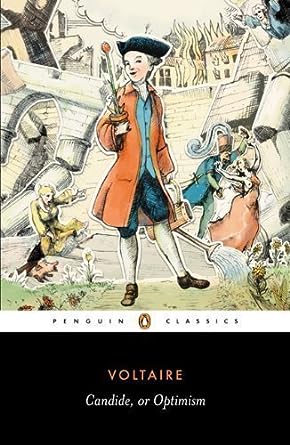 The occasion
We celebrated my birthday this year with a special theatrical treat – we went to see Candide at the Swan Theatre, Stratford.  Every RSC performance brings enormous production values and Candide was no exception.  This play was not Voltaire’s original, but Mark Ravenhill’s take on the old Frenchman’s work.  Several others, including Leonard Bernstein and his eponymous musical, have rejigged the original.

So after the show, what did I do?  Of course, I ordered the original book.  And was I in for a surprise?  François-Marie Arouet, otherwise known as Voltaire (1694-1778) writes in a pithy, fast-moving, every-word-counts style of satire.  In my Penguin Classics version, the tale is recounted in just 91 pages, over 30 short chapters.  It is captivating prose and I was absorbed – I read it in two days.

And Voltaire’s purpose in writing Candide?  Primarily, it is a diatribe against Gottfried Wilhelm Leibniz (1646-1715), the German mathematician and philosopher, and his crazy rationalism that led him to a worldview based on optimism.  He believed that the universe is the best possible one that God could have created – ‘God assuredly always chooses the best’ and men and women therefore live in ‘The best of all possible worlds.’  These are Leibniz’s philosophical catchphrases.  And Voltaire mocks them long and hard.  ‘Always look on the bright side’ might be our modern equivalent, and that too is just as unrealistic.

Voltaire’s story
Here is the picaresque plot.  According to Voltaire, Candide lived in the castle of His Excellency the Baron Thunder-ten-tronckh in Germany.  He was believed to be the Baron’s sister’s illegitimate son, yet he was ‘a young boy on whom nature had bestowed the gentlest of dispositions’ and ‘He combined solid judgement with complete openness of mind.’  In other words, he was sweet but gullible.  His optimistic outlook had been framed by his tutor, Pangloss, who taught ‘metaphysico-theologico-cosmo-nigology’ in this ‘best of all possible worlds.’  And there was Candide’s guardian’s daughter, Cunégonde, ‘seventeen years old and rosy-cheeked … fresh, plump and appetizing.’  One day, they met unexpectedly and ‘they blushed … their lips met, their eyes blazed, their knee trembled, their hands strayed.’  Oh the dénouement!  The Baron saw ‘this cause and that effect’ and ‘chased Candide out of the castle with great kicks to his backside.’

Candide, with a string of good and bad companions, roams the world and encounters a series of good and bad circumstances including wars, earthquakes and Christians.  His naïve optimism is crushed as his realism develops – ‘… covered in blood and shaking uncontrollably, Candide said to himself: “If this is the best of all possible worlds, what must the others be like?”’  He meets ‘a man who had been holding forth … for an entire hour … on the theme of charity’ and begs him for bread.  The orator asks, ‘Do you believe that the Pope is Anti-Christ?  When Candide dithers, the preacher scolds him, ‘You don’t deserve to eat.  Be off you wretch!  Out of my sight, you miserable creature!’  Then again, Candide meets ‘A good Anabaptist named Jacques’ who willingly feeds Candide as ‘a fellow being with two legs, no feathers and a soul.’  Voltaire loves to satirize religious hypocrisy (and so should we).

Out in the big, wide world, Candide’s disasters continue.  Pangloss is discovered destitute and eventually hanged.  Mademoiselle Cunégonde is found alive and trembling, but raped and disembowelled.  They ride off to Cadiz, board a ship to South America, because the optimistic Candide still believes, ’No doubt about it, the New World is the best of all possible worlds.’

And so Candide’s adventures continue, mostly unbelievable, mostly unexpected, mostly gripping.  He arrives in Eldorado and leaves with gold and gems, the natives’ ‘pebbles and mud’.  Further horrors of war, murders, rapes and double-dealing eventually take their toll on poor Candide.  In Surinam, he comes across a slave whose master had cut off his left leg and right hand. ‘Oh Pangloss!’ cried Candide.  ‘This is one abomination you could not have anticipated, and I fear it has finally done for me: I am giving up on your Optimism after all.’ – ‘What is optimism?’ asked Cacambo [his valet] – ‘Alas! said Candide, ‘it is the mania for insisting that all is well when all is by no means well.’  More and more horrors emerge.  And ‘This sequence of events completed Candide’s despair.  The wickedness of man now revealed itself to him in all its ugliness.’

He longs to be united with his first love, Cunégonde.  On his way to meet her in Venice, Candide sails via England.  He asks his new-found philosopher friend Martin, ‘Are they [the English] as mad there as in France?’ – ‘It’s a different type of madness,’ said Martin.  ‘All I know is that by and large the people … are disposed to be very gloomy.’  They are about to dock in Portsmouth when they witness the ceremonial execution of an admiral.  Martin explains, ‘… in this country it is considered useful now and again to shoot an admiral, to encourage the others.’  ‘Candide was so stunned and so shocked by what he saw, and heard, that he refused even to set foot on English soil.’

At last Candide and a little gang of his companions, including the hanged Pangloss – it had been badly done – and the Baron, his benefactor, who Candide had previously killed with a sword – also badly done – arrive at Constantinople and meet Candide’s beautiful Cunégonde, who is by now so ugly that ‘he recoiled three paces.’

After all the tears and heartaches, plus plenty of fainting, killing, lying, raping, wickedness, and that wretched, jangling refrain of ‘all goes as well as it possibly can’ or some such mawkish claptrap, the story ends.  And what is Voltaire’s grand conclusion?  ‘All I know’, said Candide, ‘is that we must cultivate our garden.’  It is an echo of Genesis 2:15.  And that is it – enigmatic, mysterious and cryptic.

Ravenhill’s version
Ravenhill’s 21-century stage play version initially follows Voltaire’s text fairly closely with a clever play-within-a-play device.  Then comes the great divorce from Voltaire.  Ravenhill introduces modern-day Lucy, who is so enraged by ecological complacency that she brings a gun to her eighteenth birthday party and shoots her family, though her mother, Sarah, survives.  She finds hope, albeit temporarily, in ‘treatment’ by a narrative therapist, a book publisher and a film scriptwriter – this is the funniest act of the play, but then psychobabble and business-speak are always game for a laugh.  Finally, we find Pangloss attempting some human cloning in order to hardwire humans with optimism.  But is it Sarah who closes the play, ‘Optimism,’ she concludes, ‘a system of cruelty with a comforting name.’  How very Voltaire-like – enigmatic, mysterious and cryptic.

Ravenhill calls his new play ‘a response’ to Voltaire.  It contains numerous touches of the master’s genius plus a few unconvincing smidgens of the pupil.  But it is good – 8 out of 10 good.  And hugely enjoyable as a birthday evening.

The lessons
First, Candide is a jolly good read – thought-provoking, shocking and nicely satirical.  Compared with my other recent fictional read, Capital by John Lanchester, well, there is no comparison.  Candide is over 250 years old and still going strong.

Second, there is much to learn from it.  Its historical context and classical content is wonderfully educational.  Voltaire’s times and language are fascinating – witness, the additional 40 or so pages of chronology, Introduction and even a map, plus the three Appendices and 34 pages of Notes that are included not just as mere academic padding but as genuine helps.

Third, there are obvious lessons for the Christian.  Voltaire displays a strong grasp of his Bible, the hypocrisy of the Church, man’s insatiable seeking for truth, his downfall, and, above all, Leibniz’s idiotic doctrine of optimism.  Voltaire was a champion of the Enlightenment.  He prized toleration and freedom of speech – both admirable qualities.  But the Enlightenment’s downside was its desire for the fruits of Christianity without the driver of true religion, namely, a knowledge of God, a Saviour as Lord and a Spirit as power.  Voltaire, the Enlightenment, Leibniz, Candide, Optimism were all doomed to fail.

By contrast, the Christian does, or should, understand that this world has gone wrong, sin has made it abnormal, everything is not rosy, ‘all is not well’.  Yet axiomatically, there is a sense in which the Christian, against all the odds and insights, does maintain that ‘all will be well’.  Why?  Because the hope of heaven, freedom from sin, eternity with a Saviour, do make us optimistic, confident and positive.  But we have no illusions about the rocky road ahead. Matthew 16:24 is sufficient to dispel any contrary notions.  So, let us set to work, cultivating our garden, doing what is right, as both our duty and our pleasure.